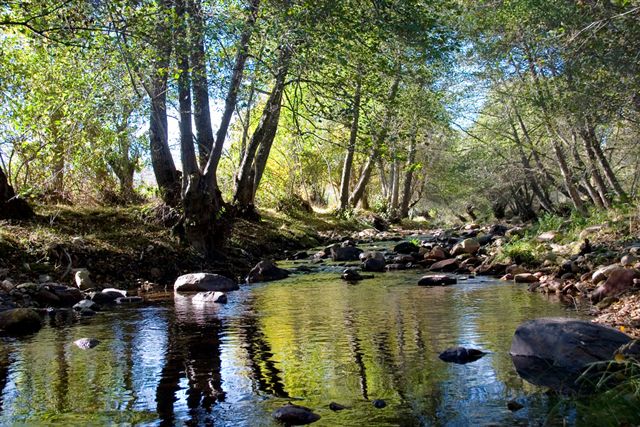 Water- the essence of life! One of the most important sources of biodiversity and landscape modelling  in the region of Castilla y Leon in Spain. Riversides, wetlands, meadows  and areas reached by water constitute an extended amount of ecosystems of great natural value, the protection and conservation of which is of paramount importance for the maintenance of wildlife, aside from the other ecological functionalisties such as economical and social cooperation.

Water comes to be of a greater significance for the bio-geography of a Mediterranian region like ours, where water is a scarce commodity. Even when the great part of Castilla y Leon contains the Duero river and its tributaries network as a backbone, there should be mentioned that other watersheds float the region. So, Tiétar, Alagón and Alberche take their waters into Tajo, and others into the watersheds of Ebro y Miño which are the 4 hydrographic basins in the region.

The programme for the Management and Observation of Mediterranean Wetlands and River Banks in Natura 2000: “MedWetRivers”. It is funded from the EU financial instrument for the environment LIFE and has as its own objective to contribute to the conservation of those great value and importance natural sites, through the creation and elaboration of instruments and tools that make sure a sustainable management of the same, and a close monitoring to the natural affluence.

There are two crucial objectives of the project: on the one hand, is to guarantee the recovery, stability, conservation and maintenance of habitat favourable for species linked to water. On the other hand, it is to improve the ecological conditions in coherence with Natura 2000.

To get to terms with these objectives initially there was established a Participating Program of Management for all CISs/SPAs fluvial systems of meadows of the Mediterranean type characteristic of CyL, adjoined to a Programme of Monitoring for the typical habitat and species of these environments.

In order to be able to contectualise the framework in which the project has been carried out together with the experiences which we have been living through, it is necessary to consider: As a consequence of the Pilot Project started by the EC in  the Kingdom of Spain for the no designation of ZEC, CyL was compromised to follow to the end this process (ZEC) and implement conservation measures.

In these circumstances it was seen as a key factor to implement the project of LIFE MedWetRivers just as it was foreseen. this, because with the approval of:

With this, the main objectives sought by the core actions of the MedWetRivers project were largely satisfied.

- AGREEMENT 15/2015, of March 19, of the Regional Government of Castilla y León, which approves the Master Plan for the Implementation and Management of the Natura 2000 Network in Castilla y León.

- ORDER FYM / 775/2015, of September 15, which approves the Basic Plans of Management and Conservation of the Natura 2000 Network in the Community of Castilla y León.

- DECREE 57/2015, of September 10, declaring special conservation areas and special protection areas for birds, and regulating the basic management and conservation planning of the Natura 2000 Network in the Community of Castilla y León.

The necessary modifications derived from the indicated, can be synthesized in the need to:

Among the most significant consequences that have arisen is the non-proceeding  of the execution of the actions related to the preparation of the management and monitoring plans for the respective places, since they were already prepared.

However, the objectives of the project are maintained since the results of a large part of the actions will have their repercussion in the mandatory evaluation and revision of those planning, management and monitoring tools of the Protected Areas Natura 2000 of Castilla y León previously  approved.

In that way, the objectives for which these actions were implemented were satisfied, so their executions can be claimed to be a success.