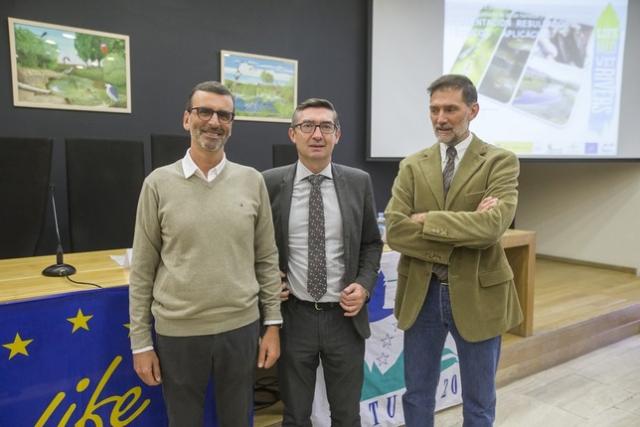 A seminar organised in the Patio Herreriano Museum of Valladolid sums up the conclusions of this initiative, which began in 2012 with an investment of 2.7 million euros

The Life MedWetRivers program will conclude this month, after more than six years of work in order to contribute in the conservation of areas of high natural value related to the aquatic environment. During this time it has  developed instruments that allow a sustainable management of the parks and a follow-up of their natural state. The work carried out was presented at the seminar held today at the Patio Herreriano Museum in Valladolid to stress out some of the results of this program, as Ical news agency gathers.

The General Director from the Natural Environment of the Junta de Castilla y León, José Ángel Arranz, recalled some of the objectives set by this Life project in its first steps in 2012. The main one which came to raise the attention  was the availability of an "adequate" management framework for the Natura Network parks after a "long process" which  started in 1992. "We considered as appropriate  that this program, which was part of the Natura 2000 Network, could be indorsed some criteria of management "he said during the opening ceremony.

For the development of this management model, a greater research in the ecosystems was required, with updated information on what their natural values ​​were, and threats. In addition, it was intended to lay out the foundations for the model to serve "as an example" for other areas of the Natura Network to which it was necessary to provide for management models. We also worked in coordination with other administrative entities with competences in these protected areas to develop not only the directives related to conservation, but also the Water Framework Directive.

From the Duero Hydrographic Confederation (DHC), Ignacio Rodríguez explained that the basin organization has been "a minor partner" in the original idea of ​​this project in which, however, it has participated "with great dedication" to understand that it was a "systemic" Life project. Since the CHD has been able to convey some ideas that contribute to improving "their way of seeing and understanding the phenomenon of natural parks and the values ​​associated with them" he said.

According to the project's own website, the objectives are to guarantee the maintenance and recovery of favourable conservation status for habitats and species of community interest linked to water; as well as improving the coherence and ecological connectivity of the Natura 2000 Network.

From the Natural Heritage Foundation, Emilio Díez-Pinés, explained that this entity has been "an instrumental partner" with concrete actions, such as the development of two studies within the preparatory actions. The first one focused on a selection of the wetlands within the Life project that were not included in the hydrological monitoring network to find out which ones had to be integrated in that network for the evaluation of their ecological status according to the Water Framework Directive and its state of conservation according to the Habitat Directive; adding to that a study on stresses  and threats of habitats.

Equally, the Natural Heritage Foundation has been in charge of the social dissemination of the project, the production of informative materials and the educational campaign aimed at schoolchildren, which is intended to give continuity and which until now has made possible  the participation of more than 12,500 schoolchildren from 200 schools in 26 natural parks. For them, a didactic unit entitled 'A tangled trip' has been developed, based on the migrations of birds from the Natura Network spaces of the project.

To achieve the objectives pursued, the establishment of a participatory management program for the SCI / ZEC of fluvial or wetland type of the Mediterranean biogeographic region in Castilla y León was proposed, together with a monitoring program for species and habitats characteristic of these environments . The project has had a budget of 2.7 million euros and a co-financing of the European Union of 1.2 million euros, that is, 46.8% of the total.